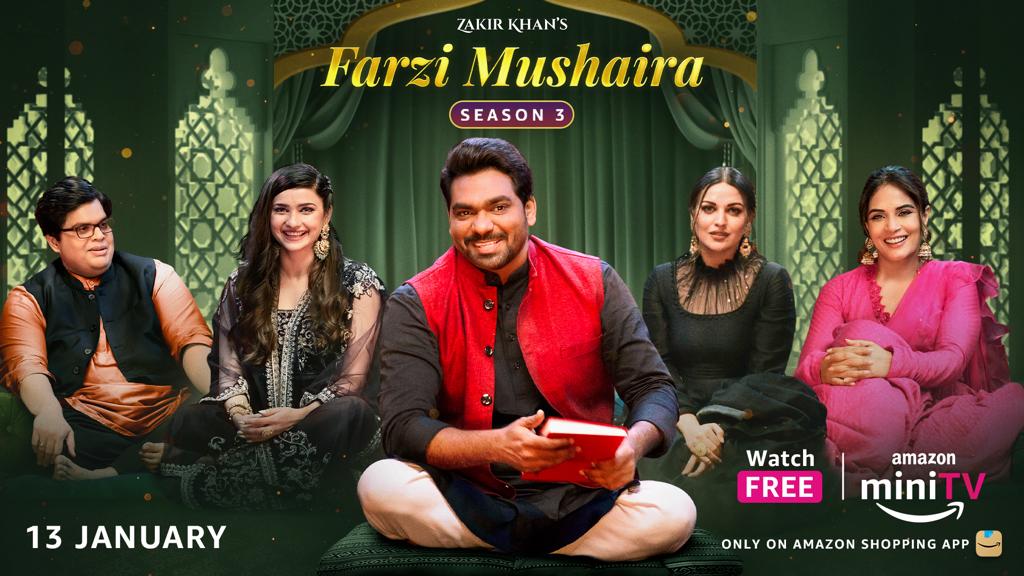 Amazon’s free video streaming service – Amazon miniTV, is here to take us on this beautiful journey with their latest release – Farzi Mushaira Season 3 with Zakir Khan. After two successful seasons, the comedian is back with his fellow shayars to entertain for the third time. There is a charm to Zakir Khan that makes everyone want to see him perform again and again in his element. His free flowing and conversational delivery, the punch lines, and the perfect mix of shayaris and comedic quips are relatable and make thought it’s like your listening to a friend. Being a small-town guy, Zakir Khan brings the flavor of love and life with an amusing touch of charisma to the stage. Beyond stand-up comedy, his shayaris and poems have also found a special place in the hearts of his fans.

Well, if that isn’t enough to convince you to watch the show, here are a few reasons why it is an absolute must-watch!

The Golden Period Vibe: Shayari, as a concept, dates back to the 12th century and ever since then, great shayars would often read and recite shayaris in mehfils. Unfortunately, the love and fame of mehfils is fading with time. In a time like this, Zakir Khan, who is known for his shayaris, has curated Farzi Mushaira – a show that lets us live in the company of great shayaris and the banter that follows them.

The Sakht Launda: Zakir Khan, the original Sakht Launda, is now a known name amongst the younger generations. He captures the problems he faces while living life as a man and narrates them in a hilariously impactful way. The content is highly relatable, and as seen in the previous seasons, it is sure to make you stop and think as the shayaris keep coming.

It’s Not Your Regular Shayari: This time, the shayaris only get more savage and hard-hitting. Each episode will have a theme with a different guest and will see a laughter-riot erupting through the audience as the participants come and pour their hearts out, one shayari at a time.

It’s FREE: Laughter is the best medicine. Laughter strengthens your immune system, boosts your mood, diminishes pain, and protects you from the damaging effects of stress. While all of these benefits are guaranteed, the best part about this medicine is, it’s all FREE! Farzi Mushaira is streaming on Amazon mini tv within the Amazon Shopping App and on Fire TV, for free! So laugh away because you literally don’t have to pay for it.

Farzi Mushaira is an 8-episode series which is currently streaming on Amazon miniTV for free!! Go ahead and be a part of the mehfil!